It’s time to introduce the South Coast Ship Watch Alliance. For several years now, Environmentalists and residents of Cowichan Bay, Ladysmith, Saltair and the Southern Gulf islands have been sounding the alarm about bulk freighters anchoring in local waterways. In community after community, independent volunteer groups have been created in response to an increasing onslaught of commercial cargo ships spilling over from the Port of Vancouver into the South West corner of the Salish Sea. Until recently, these groups have been working independently, researching the harmful impacts these huge ships are having on their communities and the environment. They’ve also sent countless letters to politicians and government officials; organized petitions; held meetings and phone calls with Transport Canada officials and put on many community gatherings to keep people informed. But the ships just keep coming.

In 2015, a plan to create even more anchorages off the NE coast of Gabriola Island caused a strong backlash and brought even more attention to the matter. In 2017, in response to the outcries of coastal communities, Transport Canada announced a National Anchorages Initiative to study the issue of cargo ships anchoring outside of Ports. From all accounts, this initiative is focused on voluntary measures andlow level guidelines aimed at encouraging foreign ships to respect local communities while at anchor. In other words, it’s a plan with no teeth. For the communities bearing the brunt of the situation, this just doesn’t cut it. 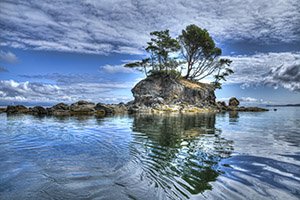 Last year the groups throughout the region realized more had to be done to raise awareness of the issue and get the Canadian government to take the issues seriously. They came together to form the South Coast Ship Watch Alliance. The goal was to speak with a common voice and push for solutions that would keep dangerous industrial shipping activity from ruining this ecologically rich and beautiful corner of the Salish Sea.

We need your help to make change, please help us take action.