In May of 2019, the federal government announced a number of measures to address threats to the critically endangered Southern Resident Killer Whale population. Among them was the creation of Interim Sanctuary Zones in three key foraging areas, off Pender Island, Saturna Island and a third at Swiftsure Bank on the West Coast of Vancouver Island. In addition to fishery closures, no vessel traffic will be permitted in these areas from June 1 to October 31.

These NO GO zones apply to all vessels including small boats and kayaks.  Yet just a few kilometres away, giant cargo ships are travelling through the Critical Habitat as they go back and forth to anchorages throughout the Southern Gulf Islands. In fact, right next to these NO GO zones freighters regularly anchor in Plumper Sound. 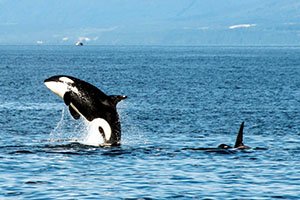 Fisheries and Oceans Canada (DFO) acknowledges that both the physical presence of vessels and underwater noise from their propellers and engines interferes with hunting and other survival activities of the endangered southern resident killer whales (SRKWs).

This points to one of many reasons the Southern Gulf Islands are no place to anchor huge cargo ships while they wait to go to Port of Vancouver.

Tell the federal government to make regulations that get the priorities straight. Send a letter today. You can also join our No Freighter Anchorages campaign following us on social media.